Joining our line of Celtic Deities is Bran the Blessed, more properly known as Bendigeidfran, who appears in the second branch of the Mabinogi, in the tale of Branwen, Daughter of LLyr.

On the advice of his council, Bran offers his sister's hand in marriage to Matholwch, the king of Ireland, in an attempt to unify and bring peace between the two countries. However nobody bothered to ask Branwen's brother (Bran's half-brother), Efnysien, what he felt about the arrangement, who promptly goes nuts and humiliates the king of Ireland by mutilating his horses. In order to appease Matholwch, Bran makes a gift of a magical cauldron which can bring the dead back to life, albeit without the ability to talk.

Learning of her predicament, Bran rallies his armies and sets out across the sea to Ireland. However, he is so huge that no ship can contain him, so he simply wades across. Forced into hasty retreat, the Irish burn the bridge over the river Liffey to stop the advancing army, however the 'larger than life' Bran simply lies himself down over the river to form a bridge for his armies to cross.

Facing certain defeat, the Irish sue for peace by building a hall big enough to house the giant Welsh king, but set a trap to kill Bran and his army by hiding warriors inside 'flour bags' hung inside the massive hall. However, Efnysien foils the trap by crushing the heads of the soldiers. To make amends for his actions and the mistreatment of Branwen, Matholwch offers to step down as king and invest their son, Gwern, in his place.

Once again a fragile peace is restored, but this is soon shattered when Efnysien throws Gwern into the fire at the feast for his investiture. A bloody battle is joined and Bran personally saves his sister, Branwen, by protecting her between his shoulder and his shield. Although the Welsh fight heroically, the Irish throw their fallen into the magic cauldron, bringing them back to life. Seeing the senseless and massive loss of life, Efnysien is filled with remorse and sacrifices himself, bursting the cauldron asunder. Eventually the battle ends, but the losses are great; virtually none of the Irish, and only seven or the Welsh survive.

Bran himself is mortally wounded in the fight, but instructs the survivors to cut off his head and carry it back with them to Wales where he shall be as good a companion as he ever was. The company of the wondrous head, as it is known, spends 7 years at Harlech before moving to the island of Gwales where they spend 80 years, blissfully unaffected by the passage of time, being comforted by the birds of Rhiannon and entertained & counseled by Bran's head.

All is well until the doors of the hall facing Cornwall are opened and all the pain and suffering of the Irish conflict comes rushing back to them. They carry the now lifeless head to London where it is buried under White Hill (the current location of the Tower of London), facing towards France, to protect the country from potential invaders.

This beautiful hand-cast statue, envisioned by Lisa was sculpted by Joe Laudati, depicts Bendigeidfran as magnificent protector king of the Island of the Mighty; sword in hand and shield on his arm. At his base stands a bridge, which is key to the lessons he teaches us in his mythology... 'A fo ben, bid bont'.... "He who would be leader, must first be a bridge".

Each statue is hand finished in antique bronze color and is numbered & signed by the artist, Joe Laudati. 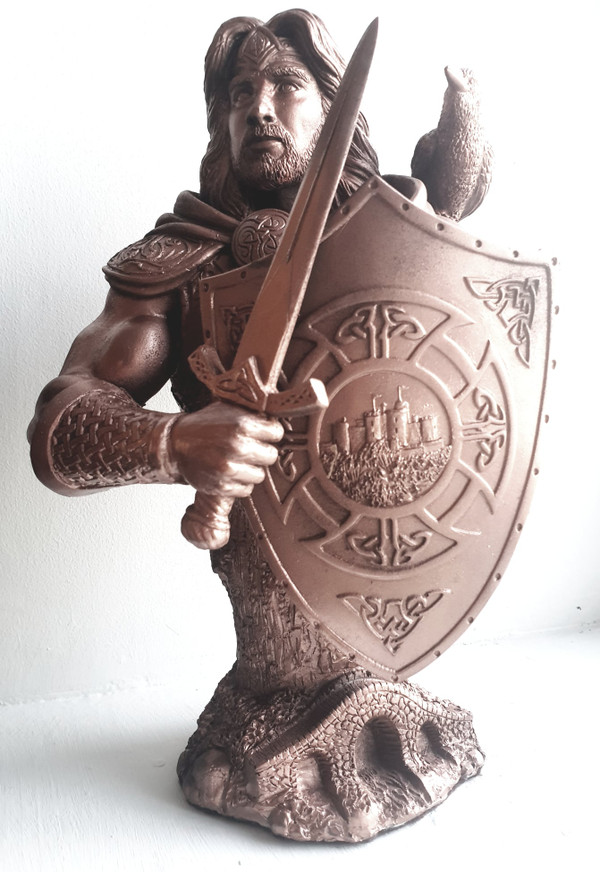