Joining our pantheon of Welsh deity statues is Arianrhod (a.k.a. Aranrhod). Known as the 'virgin queen', she is sort of the 'Sersei' of Welsh mythology, tricked into mothering (don't ask) the heroes Dylan ail Don, and Lleu Llaw Gyffes. The statue includes many of the symbolic elements associated with Arianrhod, including the shield, the swan, the stang staff, and spindle, the flowers of oak, broom, and meadowsweet, and the constellations of Cygnus and the Silver Wheel. Also, a pair of shoes! She is considered the goddess of the moon and stars.

In envisioning Aranrhod, Lisa has this to say:

"Working with her was one of the most interesting, and educating, journeys yet.

I will attempt to explain all of the details she asked for and showed me.

She asked for a crown as she is truly a Queen and her crown of 7 stars is to remind us of the Corona Borealis as well as the Star card in the Waite-Smith deck, for which she tells me represents her. She then went on to tell me that the bird in the tree is not a phoenix, it is indeed Cygnus, the bird constellation and it is why to this day all Swans in the UK belong to Her Majesty, The Queen. Accordingly, Swan is seated on one side of her throne as her power animal. (Each of our Statues has, thus far, been accompanied by their power animal.) On the back of her throne are the Corona Borealis and Cygnus constellations, which together  form the Stang, something she insisted upon holding, to show her command of the arts magickal. She also holds a spindle, for she is the great weaver, the holder of the thread of life. Around the base of the statue are clues to not only her story, but also that of her son, Lleu. You will notice the shoes made of fine leather, the shield with Lleu’s coat of arms, and the three flowers of Blodeuedd: Oak, Meadowsweet and Broom.

Caer Aranrhod in stone sits at her feet, inviting you to get to know her, her story, and her magick.

It's interesting that this rock formation off the coast of Wales, which can be rarely glimpsed in the right tidal conditions, should share the same name that the Celts used to refer to the constellation of Corona Borealis. As you might expect, there is a quite a story behind it...

Arianrhod is profoundly important as a powerful representation of the divine feminine within Welsh mythology. It's therefore not surprising that she has fostered a deep relationship with other women who seek to 'tell her story'.

Celtic scholar & author, Jhenah Telyndru, and artist, Emily Brunner, are two such people. Together, these beautiful and amazingly talented women have created the Avalonian Oracle, which I strongly recommend. It was Emily who received divine inspiration that the stones of Caer Arianrhod were a reflection of the seven stars of her crown and depicted them as such in their deck - which, in turn, inspired Joe to anchor the Corona’s stars at Arianrhod's feet (As Above - So Below).

You can learn more about Jhenah Telyndru and Emily Brunner by clicking the links.

Although the Fourth Branch of the Mabinogi would have us believe that her brother used deceptive magick to overcome her 'tyngeds', could it be that she is the one who actually tricked Gwydion, allowing her the power to name her son and give him arms?"

Incredibly detailed, each piece is hand-cast, painted, finished, numbered and signed by the artist, Joe Laudati, himself. 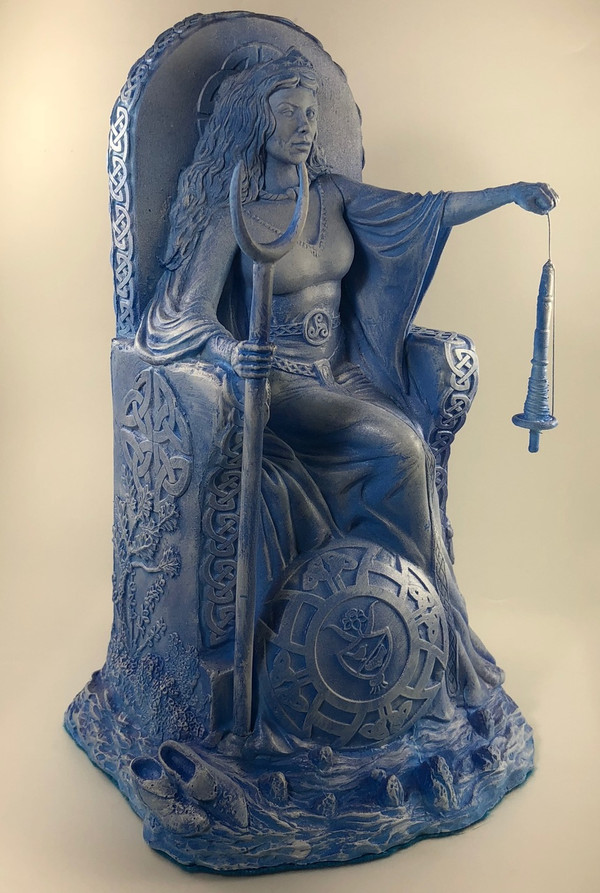 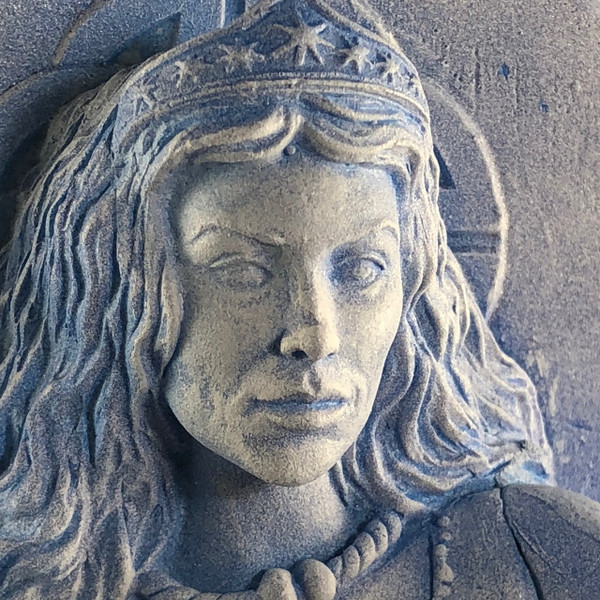 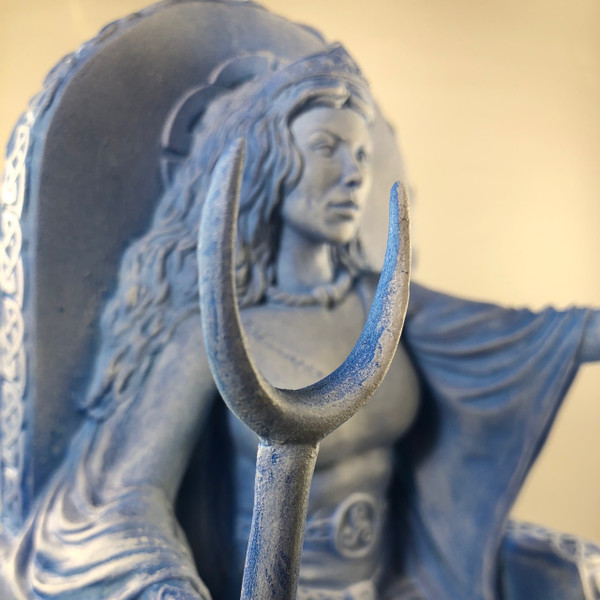 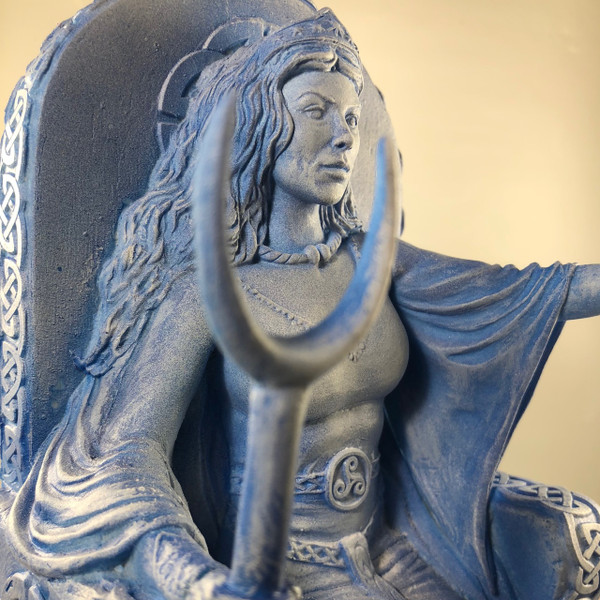 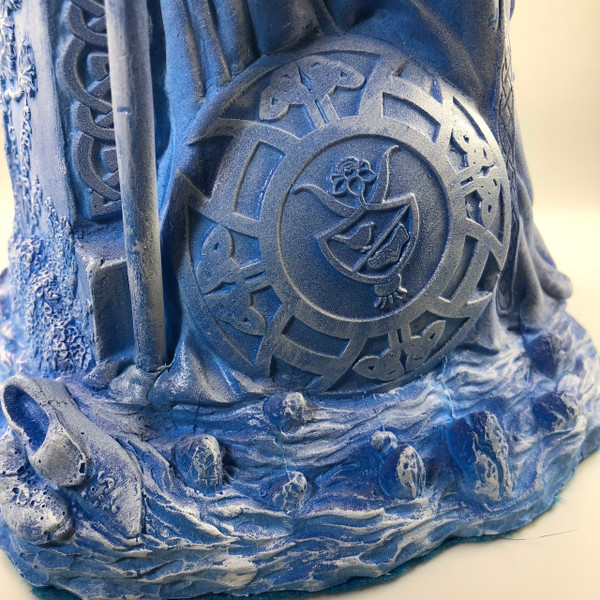 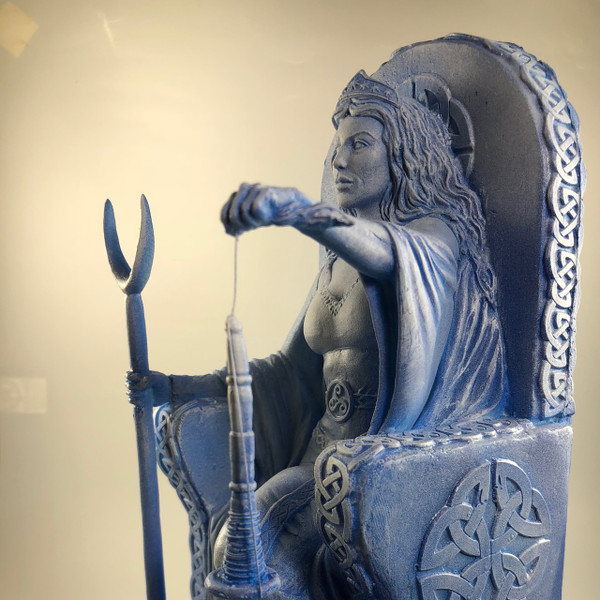 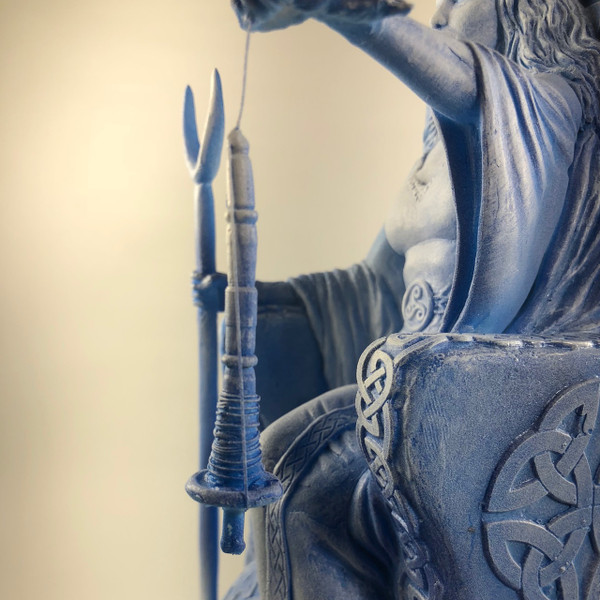 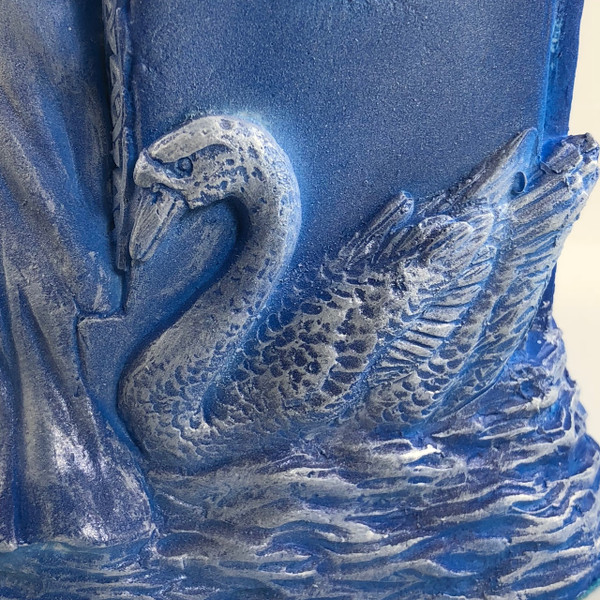 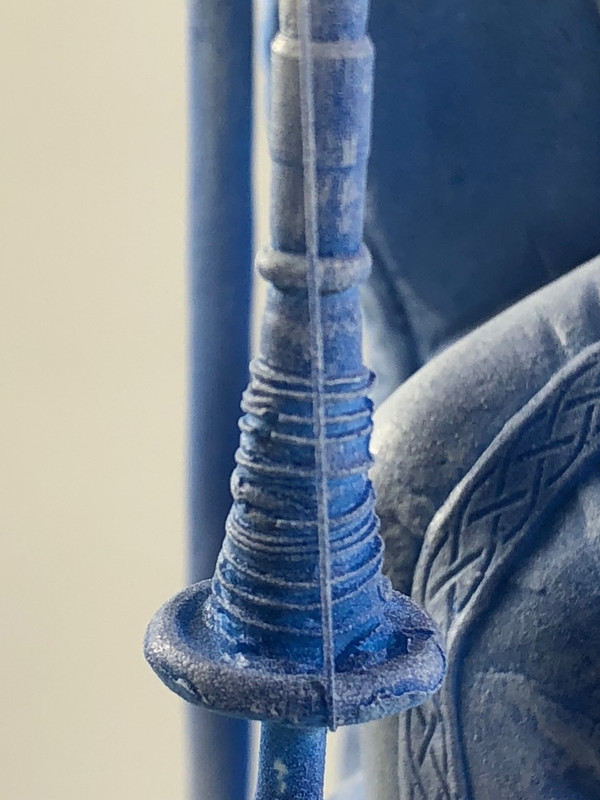 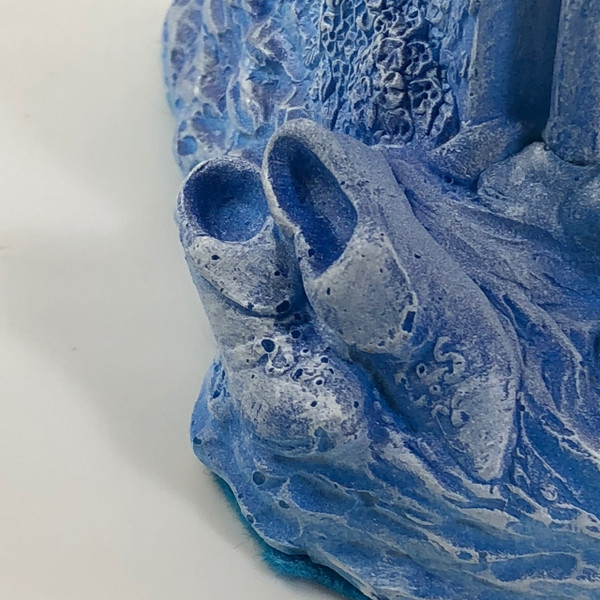 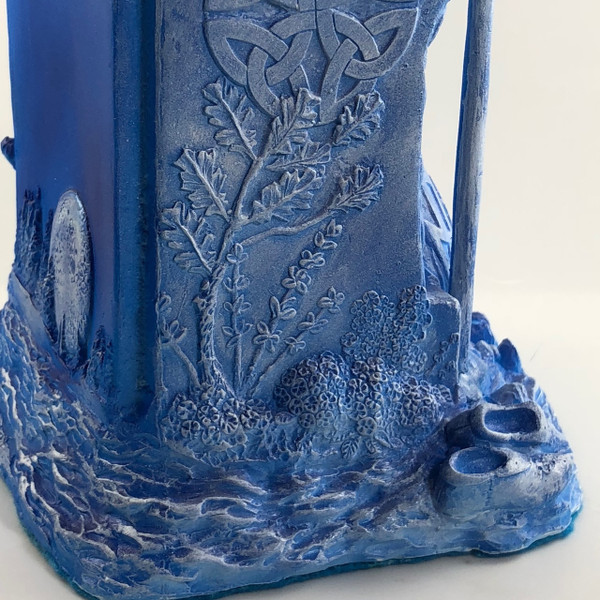 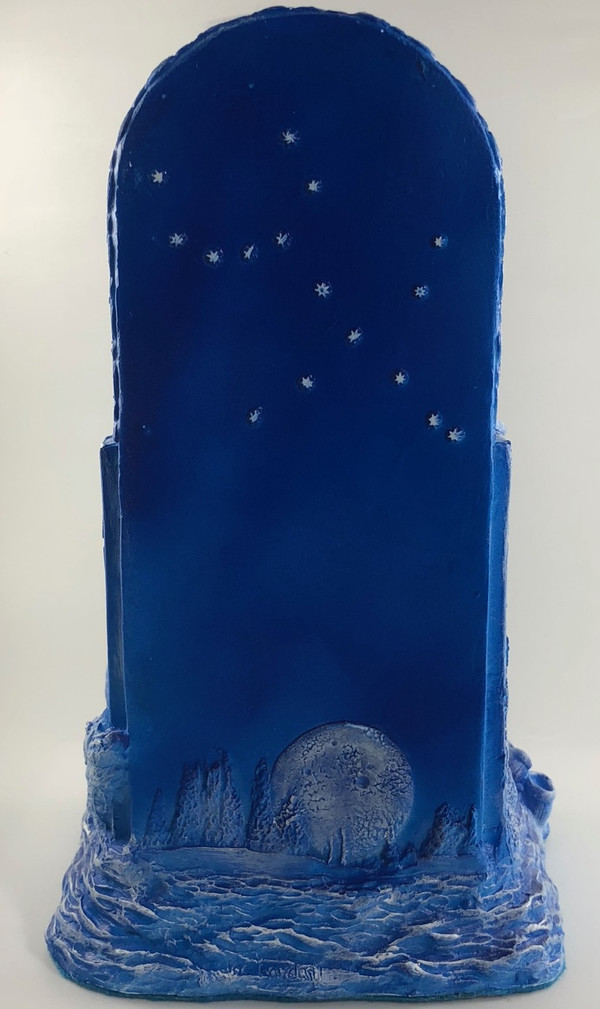 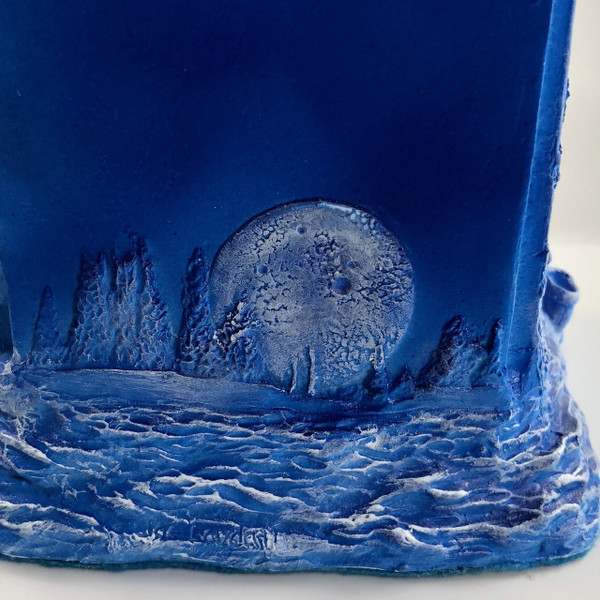 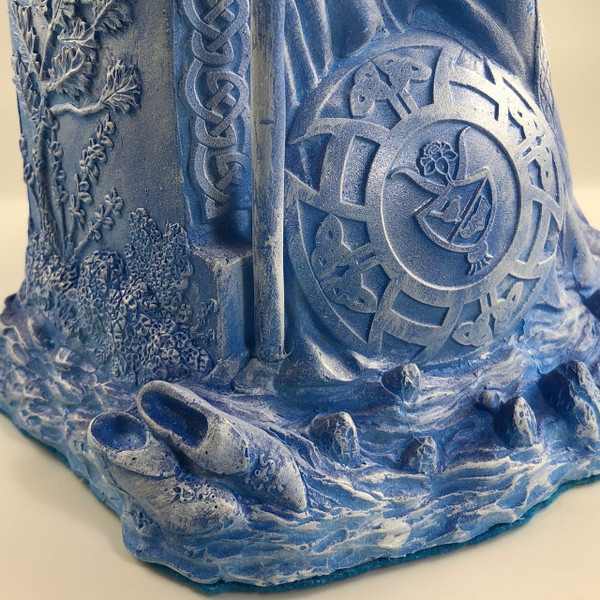 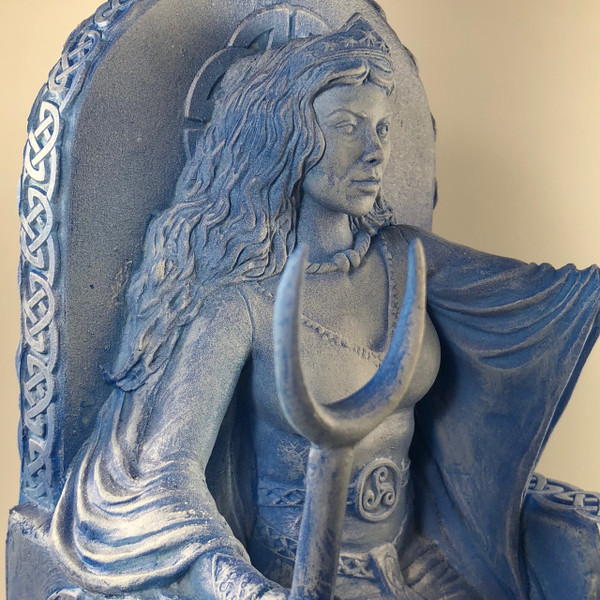 I have been looking for a different depiction of Arianrhod for a long time. This depiction is extraordinary. The material used, the casting, attention to detail, and overall product quality is great. The iconography of this statue is steeped in mythology as well. Overall, this is a fantastic creation. Kudos to the artist! The packaging showed attention to detail and it arrived safely and timely.

I got this statue a while ago. And I have to say how beautiful She is, how exquisite the detail is. This piece really captures Her energy for me. I’m using it as an icon for my shrine, and I can’t imagine a better depiction. Also, this shop is great. Shipping was lightening fast.

This Goddess is amazing and fabulous! The craftsmanship and detail is unbelievable. She is even nicer in person! My order came very quickly and was securely packaged. I'm delighted with my purchase!

Stunning piece! The details are phenomenal! The blue works well with the cream color of the other statues in the series! Highly recommend this shop!