This stunningly beautiful depiction of Branwen, who comes to us from the 2nd Branch of the Mabinogi, is the latest in our line of Welsh Celtic deities.

Branwen's tale, Branwen ferch Llŷr (Branwen, daughter of Llŷr), is a tragic one and teaches us of the futility of war.

Sister of Bran the Blessed, king of Britain/Wales, she is betrothed to Matholwch, the king of Ireland, in an attempt to unify and bring peace between the two countries. However nobody bothered to ask Branwen's brother (Bran's half-brother), Efnysien, what he felt about the arrangement, who promptly goes nuts and humiliates the king of Ireland by mutilating his horses. In order to appease Matholwch, Bran makes a gift of a magical cauldron which can bring the dead back to life, albeit without the ability to talk.

Learning of her predicament, Bran rallies his armies and sets out across the sea to Ireland. However, he is so huge that no ship can contain him, so he simply wades across. Becoming aware of the advancing army, the Irish sue for peace by building a hall big enough to house the giant Welsh king, but set a trap to kill Bran and his army by hiding warriors inside 'flour bags' hung inside the massive hall. However, Efnysien foils the trap by crushing the heads of the soldiers. To make amends for his actions and the mistreatment of Branwen, Matholwch offers to step down as king and invest their son, Gwern, in his place. Once again a fragile peace is restored, but this is soon shattered when Efnysien throws Gwern into the fire at the feast for his investiture. A bloody battle is joined and although the Welsh fight heroically, the Irish throw their fallen into the magic cauldron, bringing them back to life. Seeing the senseless and massive loss of life, Efnysien is filled with remorse and sacrifices himself, bursting the cauldron asunder. Eventually the battle ends, but the losses are great; virtually none of the Irish, and only seven or the Welsh survive.

Returning to Wales with the seven survivors, Branwen is overcome with grief and dies of a broken heart. She is buried on the banks of the river Alaw near Llanddeusant, Anglesey. Her grave is marked by a cairn, Bedd Branwen, which can be seen to this very day. The single standing stone bears a deep split, which legend says represents her broken heart.

Finished in antique white, the statue stands approximately 11 inches tall and shows Branwen befriending the starling perched on her arm. She stands upon the cleft rock of Bedd Branwen, adorned with Alder leaves. At her feet is the Raven, a representation of her brother, Bran.

Each statue is individually cast, finished, painted, numbered and signed by the artist, Joe Laudati. 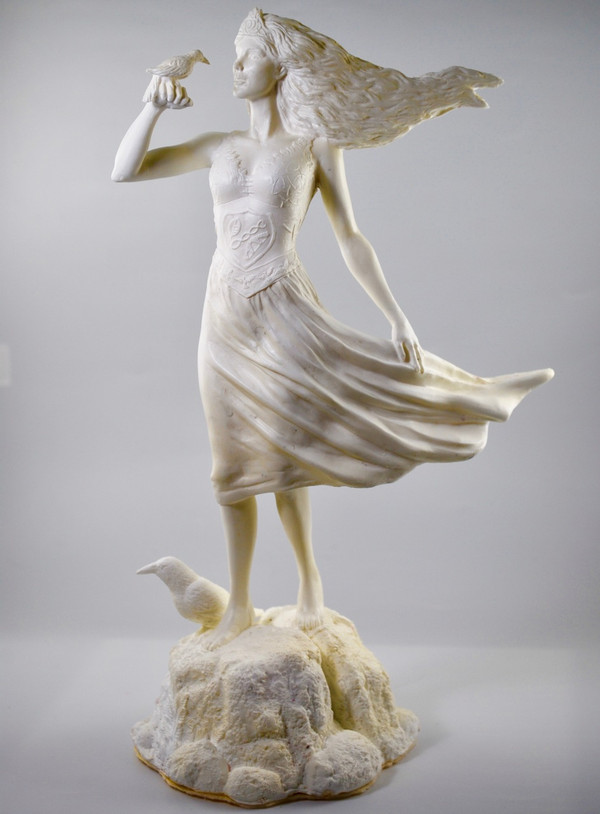 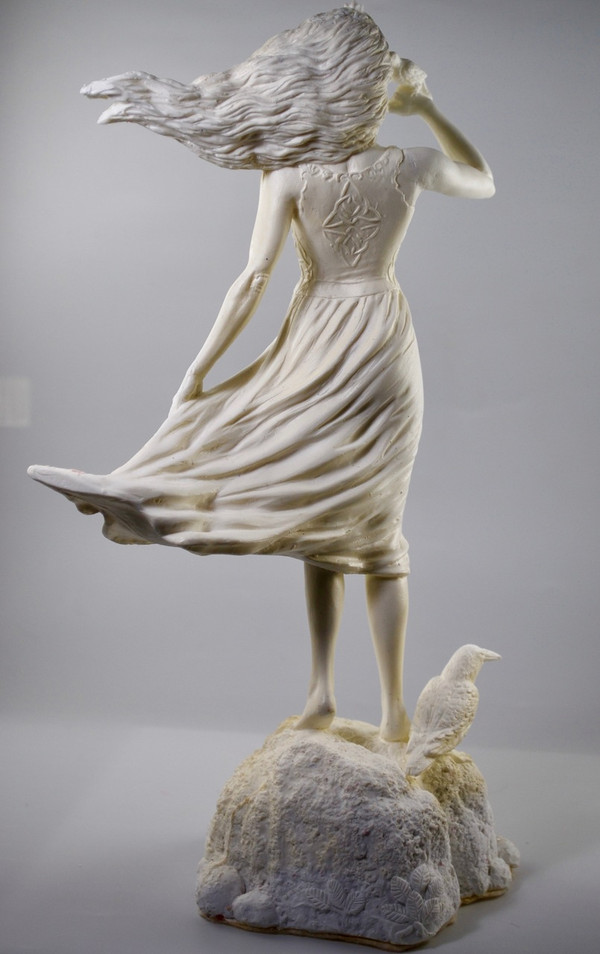 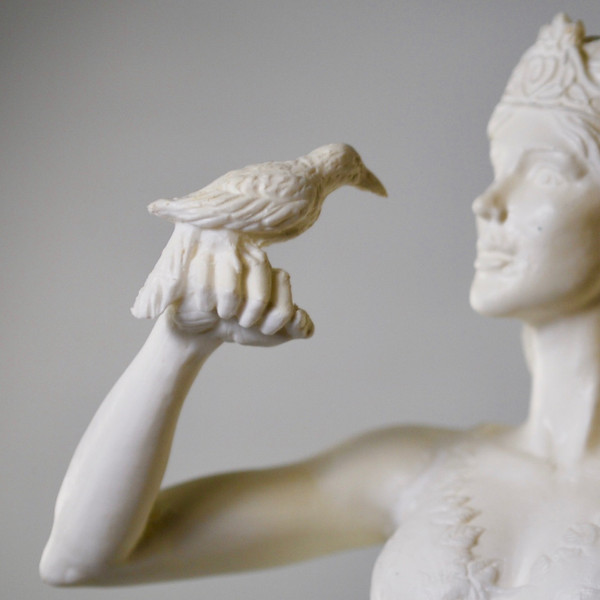 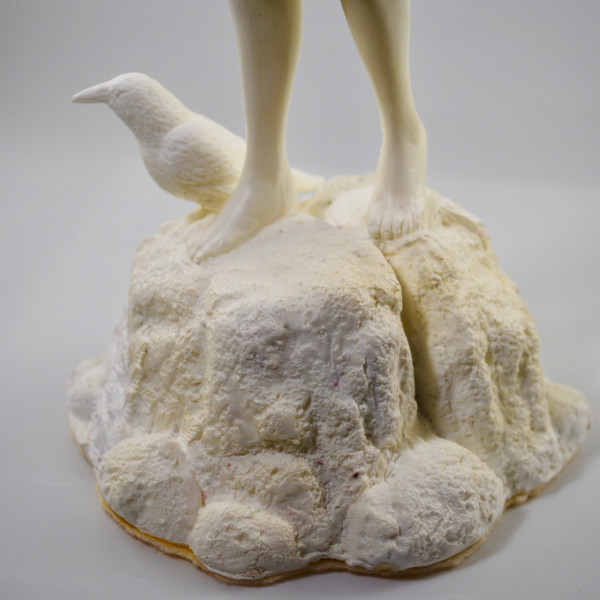 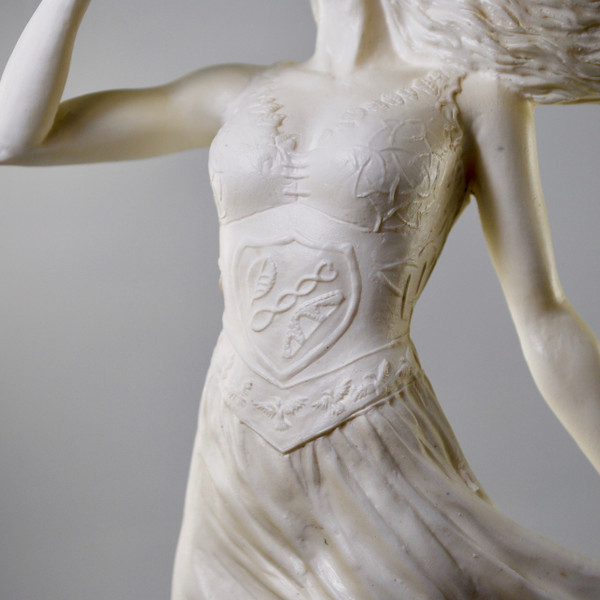 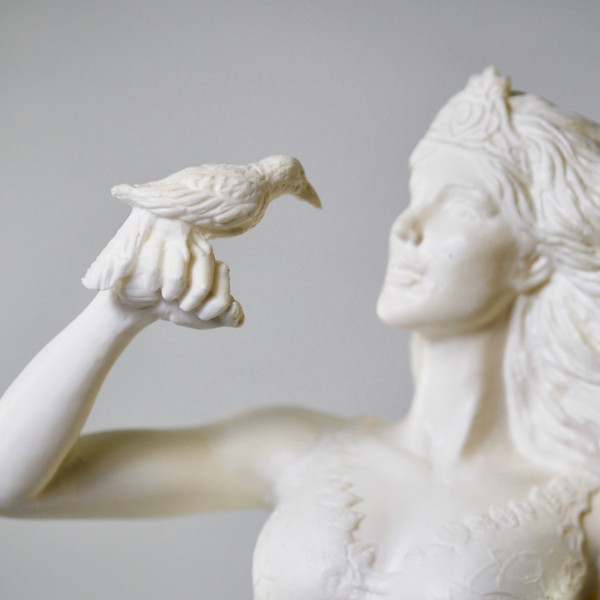 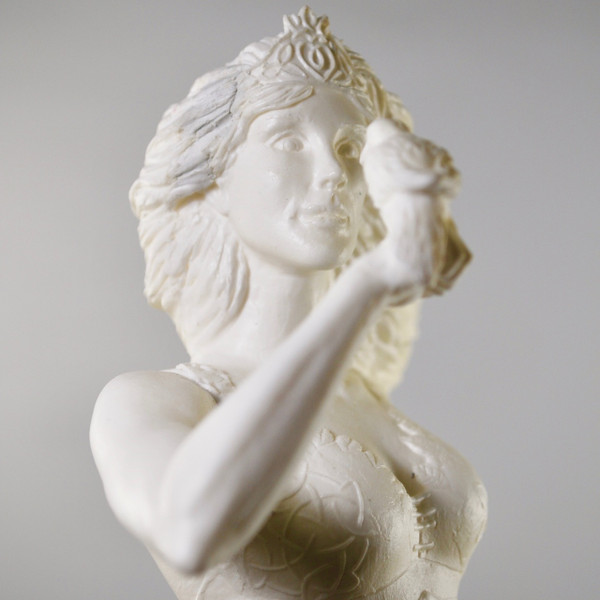 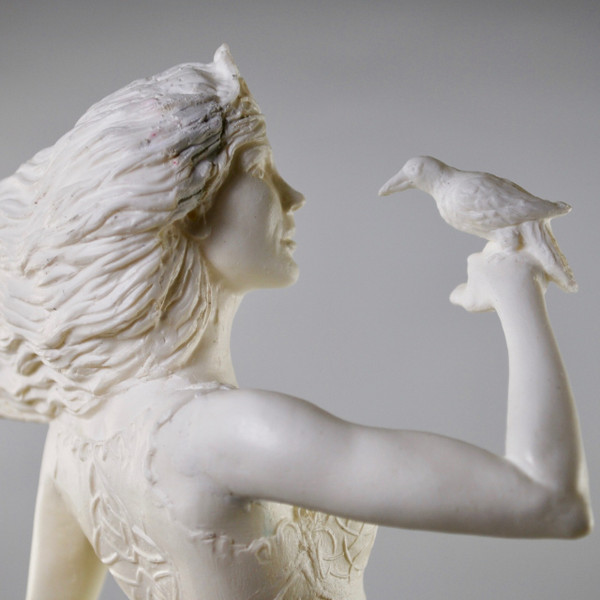 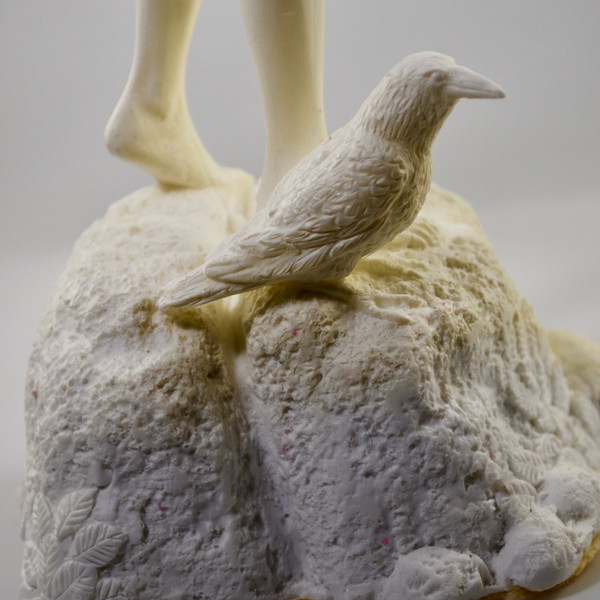 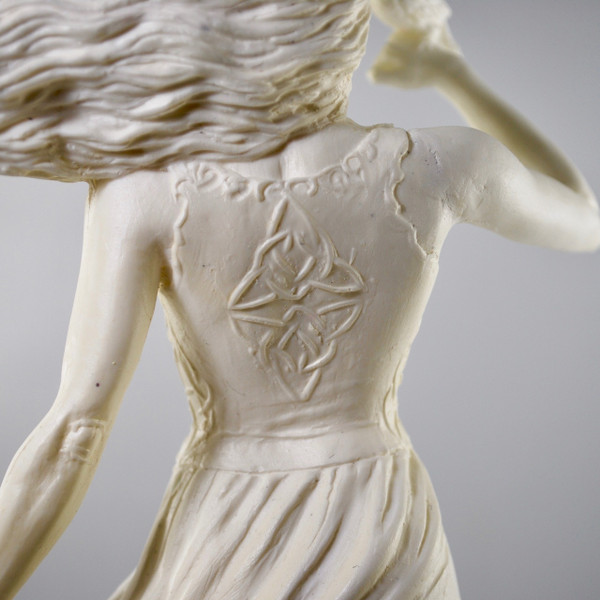 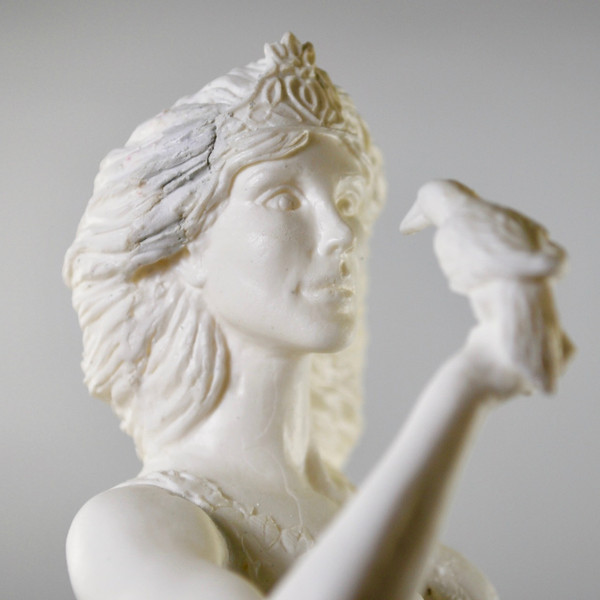 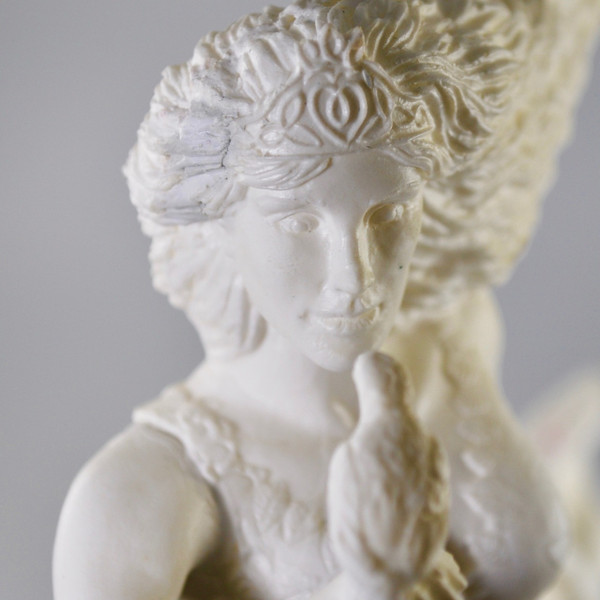 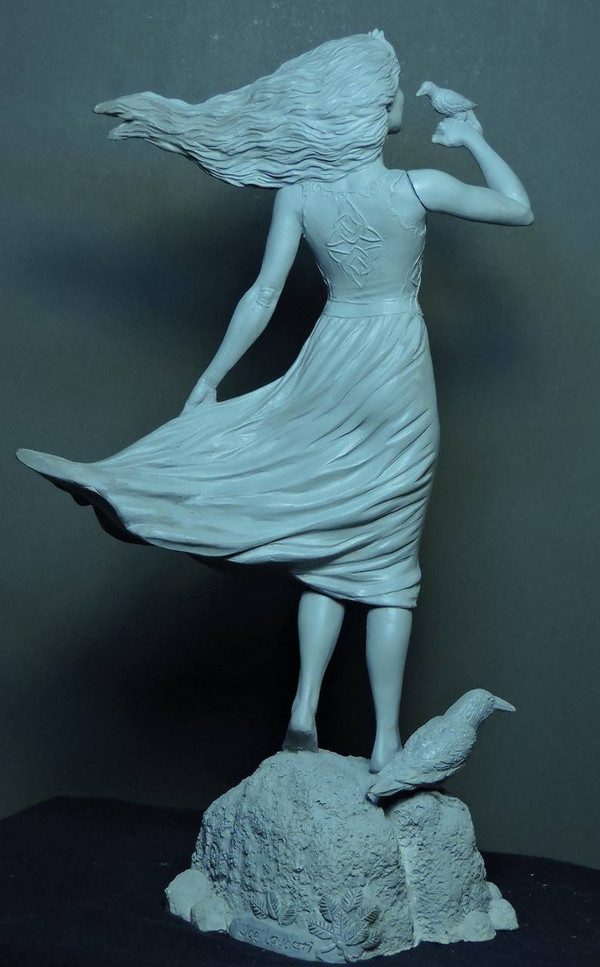 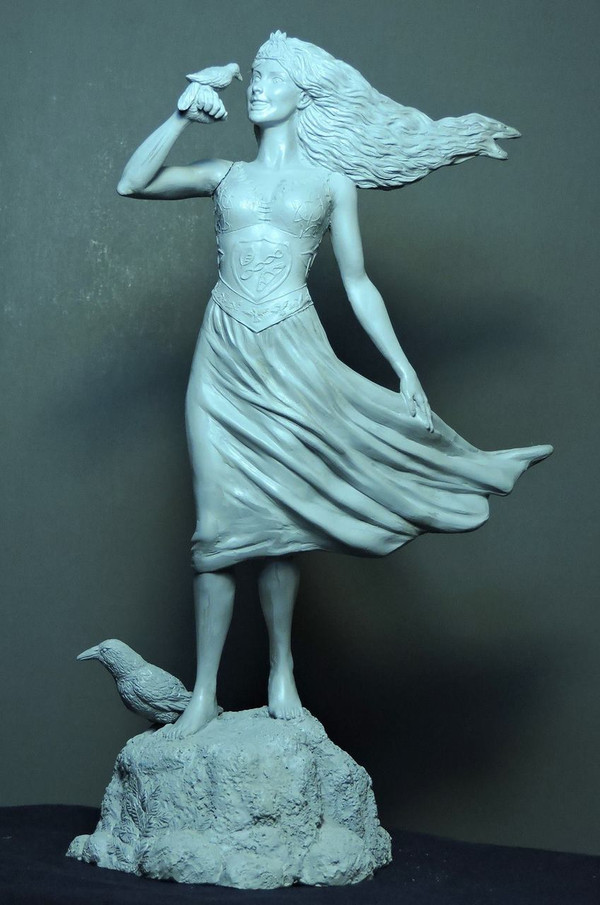 This piece is the only statue of my beloved Branwen in existence, it seems. It also seems, hands down, that it is and will remain the most exquisite. I love love love Her. The detail on Her is gorgeous, The composition The whole nine, really. As an added plus, She even "feels like Branwen" which has sometimes been difficult to find when picking out statues for shrines. I would buy this again. And especially from the Awareness Shop. Their shipping is prompt and everyone seems just lovely.

Beautiful statuette, superbly detailed and great value! The staff were fantastic with their help and I am totally satisfied!!